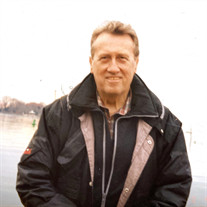 Simmons, Robert H. (Bob), 83, passed away on February 10, 2021. He was the son of the late Edward M. and Dorothy (Smith) Simmons, and a life-long resident of Rocky Hill, CT. Bob was a graduate of the University of Maine, and served 6 years in the Connecticut Army National Guard. In 1960, he joined his father at the Simmons Insurance Agency, which he subsequently bought in 1965. Bob successfully operated the business for nearly 35 years before retiring in 1999. Bob was also a director of 2 banks (Cromwell Savings Bank, and the Farmers and Mechanics Bank) for more than a decade. Besides his parents, Bob was predeceased by his brother, Edward M. Simmons, Jr. He is survived by his children, Heidi Simmons-Chouinard (husband Luc) of Beaconsfield, QC, Jeffrey Simmons (wife Sherri) of North Charleston, SC, and 5 grandchildren: Alex, Eric, and Julie Chouinard, and; Hayley and Matthew Simmons. He is also survived by his former sister-in-law, Judith Simmons, her children and grandchildren. Bob also leaves behind the love of his life and longtime partner, Beatrice Donahue, with whom he spent the last 23 years of his life. He and Bea had many common interests such as gardening, UCONN basketball, tag sales, and jazz concerts. They wintered in Florida for many years and then took up cruising in the Caribbean and on the Mississippi River. Bob loved all kinds of music from classical guitar to country to blues, and he and Bea became devoted fans of many local musicians. Bob will be remembered by those who knew him for his kind heart, gentle spirit, and wonderful sense of humor. His grandchildren particularly enjoyed the numerous funny stories he told detailing his efforts to gently capture and relocate the many pesky squirrels that were feeding on his backyard birdfeeder and garden. Bob was also an avid reader, enjoying reading the newspaper daily as well as numerous books and magazines. He had a passion for learning about the world around him, enjoying walks in woods, and observing the activities of birds and other wildlife in his yard. He was known for taking road trips off the beaten path across Connecticut and other parts of the Northeast, exploring interesting sites and meeting new people. In recent years, Bob had faced declining health with courage, grace, and dignity. He will be greatly missed by his family and all those who had the good fortune to know him. Due to the COVID 19 pandemic, A virtual celebration of life for both Bob and Bea will be held Sunday April 18th, at 3PM please contact Rocky Hill Congregational Church or a family member for the zoom link. In lieu of flowers, memorial donations may be made to either the Rocky Hill Congregational Church or a charity of your choice.

Simmons, Robert H. (Bob), 83, passed away on February 10, 2021. He was the son of the late Edward M. and Dorothy (Smith) Simmons, and a life-long resident of Rocky Hill, CT. Bob was a graduate of the University of Maine, and served 6 years in... View Obituary & Service Information

The family of Robert Simmons created this Life Tributes page to make it easy to share your memories.

Send flowers to the Simmons family.