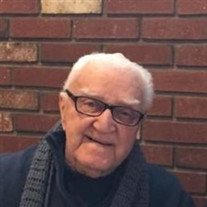 Robert R. Walton, 92, husband of 70 years to Marie-Blanche (Ouimet) Walton, passed away peacefully on Tuesday, February 23, 2021 at Middlesex Hospital. Bob was born on March 29, 1928 in New Bedford, MA. and was the son of the late Thomas and Rosina Walton. Bob grew up in New Bedford, attended and graduated from New Bedford Vocational Technical High School, and took business courses after high school in CT. Bob faithfully served his country as a member of the U.S. Army during World War II. After his discharge, Bob began his successful 24+ year career at the Hartford Insurance Group. After retiring from the Hartford, Bob then began an encore career in the Retirement Divisions of Cigna and Prudential, working in a part-time capacity with each of those entities until the robust age of 77. Bob enjoyed a long, full rich life, and he was a man of strong faith. In addition to his unending love for his family, Bob’s enduring passion was his affection for all things musical, especially dancing, choreography, and Broadway shows. Bob loved a good party, and could always be counted on to add life to those occasions. Bob also was a talented dancer and choreographer in his own right, participating in and leading many shows and revues during his lifetime. He was a very sweet, gentle person, and everywhere he went, he made a friend and was a favorite of everyone who had the pleasure of his company. In addition to his loving and devoted wife Blanche, Bob is survived by his daughter, Judy Chusmir and her husband Robert Chusmir of Cromwell, and his two sons, David Walton and his wife Carrie Walton of Cromwell, and Michael Walton and his wife Linda Walton, also of Cromwell. Bob is also survived by seven grandchildren, Jodi King and her husband Jeff, Tracie Curran and her husband Ryan, Kim Chusmir, Jason Walton, Chris Walton and his wife Allison, Ashley Carigliano and her husband Christopher, and Eric Walton and his wife Hilary, and nine great-grandchildren, Cheyenne and Austin King, Danny and Rachel Curran, Matthew and Charlie Chusmir, and Lucas, Cali and Kyla Carigliano. He also leaves a sister, Ruth Almeida, of New Bedford, MA. Services and burial are private at the convenience of the family. A Memorial Service and Celebration of Life will be held at a later date. In lieu of flowers, donations in Bob’s name can be made to St. Jude’s Children’s Hospital. For online expressions of sympathy to the family, please visit www.rosehillfuneralhomes.com.

Robert R. Walton, 92, husband of 70 years to Marie-Blanche (Ouimet) Walton, passed away peacefully on Tuesday, February 23, 2021 at Middlesex Hospital. Bob was born on March 29, 1928 in New Bedford, MA. and was the son of the late Thomas and... View Obituary & Service Information

The family of Robert Richard Walton created this Life Tributes page to make it easy to share your memories.

Send flowers to the Walton family.