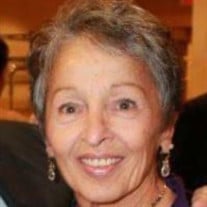 Suzanne Mary (Foley) O'Leary of Rocky Hill died peacefully on February 18, 2021. She was born on September 24, 1949. The daughter of the late Arline (Poliquin/Foley) Scarborough and the late Joseph Foley, the stepdaughter of the late James Scarborough. She lived in Hartford her whole life, moving to Rocky Hill in 1998. She attended Hartford Schools and graduated from A.I. Price in 1967. She was employed by the Hartford Board of Ed and was a secretary at Naylor School for 23 years. She worked at Hartford Adult Ed. for 3 years and retired from Hartford after 26 years with the Board of Education. She retired on a Friday and on Monday began her new career with the Rocky Hill Board of Education as a secretary at the High School. She retired from Rocky Hill in 2014 after ten years. At the age of 50 she got a tattoo, her motorcycle license, took up tap dancing and keyboard lessons. She was an avid reader and loved doing crossword puzzles. She loved the beach and exercising daily. She was willing to try new things and found many adventures in her full life. She was a Bushnell Volunteer and a member of the “Blazing Bonnets”-Red Hat Society. She could often be seen riding “On a Wing and a Prayer” the '06 Goldwing Trike that she rode with her love Evan. Suzanne loved her family and will be greatly missed by all of them. She leaves her daughter Trina and her husband David Pettengill, her son John and his wife Debra O'Leary. She was “GiGi” to her 4 grandchildren whom she adored; Leah Pettengill (and boyfriend Nick Barnier) and Casey Pettengill (and fiancé Sam Harvey), Jack O'Leary and Sean O'Leary. She also leaves her 3 brothers and their wives: John and Nancy Foley of Wethersfield, Henry and Debbie Foley of Suffield, Rob and Ellen Foley of Wethersfield and brother-in-law Richard Rousseau of Windsor. She was predeceased by her best friend and sweetheart Evan Jones of Orange, CT, her first husband John O'Leary and her sister June Rousseau. She leaves a host of nieces and nephews and many wonderful friends. The family would lastly like to extend our gratitude to Suzanne's neighbors Barry and Jan Wolfgang for everything they did for her. A private service will be held at the convenience of the family. Arrangements are being handled by Rose Hill Funeral Home. Memorial donations may be made to the American Cancer Society at http://donate3.cancer.org/ .

The family of Suzanne Mary O'Leary created this Life Tributes page to make it easy to share your memories.

Send flowers to the O'Leary family.