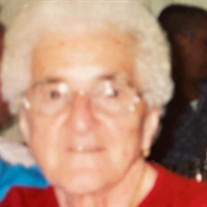 Beloved mother, wife, nonna, sister, and zia, Violanda (Brini) Cassetta of West Hartford, formerly of Rocky Hill, passed into the arms of our Lord on December 23, 2020. She was 95 years young and predeceased by her husband, Giuseppe Cassetta, after 36 years of marriage. She was born on January 25th, 1925 in Sepino in the Province of Campobasso Italy a daughter of the late Marchello and Maria (Iamartino) Brini and lived in Santa Croce in the Province of Benevento. In 1954, she married Giuseppe Cassetta, and welcomed their first child, Michael a year later in 1955. In 1961 Viola and her husband Giuseppe were given the opportunity to come to America with their five-year-old son, and their yet to be born daughter Maria. She was a trained seamstress in Italy and continued that profession for twenty-five years after moving to America. Viola and Giuseppe lived in Hartford and Rocky Hill. She was known as a strong, hard working woman, who enjoyed her family’s homemade wine, and fruits & vegetables grown from her garden. Viola loved spending time with her grandchildren, making her homemade cavatelli and tomato sauce. Viola is survived by her son Michael and his wife Rosemary of Berlin and their children Joseph and Paul (Viola’s grandchildren) along with Paul’s wife Nicole and their child Noella (Viola’s great grandchild), her daughter Maria and Maria’s daughter Cara; as well as two sisters, Maria Pietraroia and Lucia Pelluso. She was predeceased by a brother, Sebastian Brini and a sister, Angelina Cassetta. She was dearly loved and will always be remembered as Nonna Viola. Funeral services and burial will be private and at the convenience of the family. Please share online expressions of sympathy, memories, or photo tributes at www.rosehillfuneralhomes.com.

Beloved mother, wife, nonna, sister, and zia, Violanda (Brini) Cassetta of West Hartford, formerly of Rocky Hill, passed into the arms of our Lord on December 23, 2020. She was 95 years young and predeceased by her husband, Giuseppe Cassetta,... View Obituary & Service Information

The family of Violanda Cassetta created this Life Tributes page to make it easy to share your memories.

Send flowers to the Cassetta family.