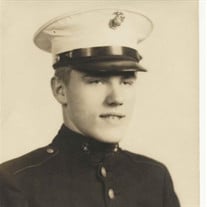 Walter Henry Grisevich, 94, of East Hartford, CT passed on to his reward on February 19th, 2020. Born on November 17, 1925, he was one of six children of Harry Benedict and Katherine (Pavilowich) Grisevich of Hartford. As a 17 year old farm boy, he eagerly enlisted in the Marines during WWII and fought for the liberation of Guam as a proud Fifth Fielder of the 1st Provisional Marine Brigade. Later in life, he was passionate and committed to ensuring that his fallen comrades who were left off of the Official Guam Casualty List be acknowledged and remembered. Feeling strong ties to the island and people of Guam, he returned several times in his later years with fellow soldiers. After the war, he married the love of his life, Madeline Carpenter, whom he met while a Bond Bread salesman. They were happily married for 58 years before her passing in 2009. As a couple, they were lovingly devoted to their extended family. Walter’s many grandchildren, nieces, nephews and their families will remember him for his thoughtfulness and generous spirit. His joyful and outgoing nature was exhibited in whatever he did - working in sales, chauffeuring at Dexter Corporation in Windsor, or collecting stamps, his favorite hobby. He was predeceased by his parents, brothers Leon and Paul Grisevich, and sister Mary Skripol. He is survived by his stepson Stewart Brown and his wife Regene of Manchester, and his brother George Grisevich of Hartford and sister Lillian Parks of West Hartford. Calling hours are on Saturday, March 7th, at Rose Hill Funeral Home in Rocky Hill, from 10:00 to 11:00 am, followed by a memorial service and burial. In lieu of flowers, memorial contributions may be made to Iwo Jima Survivors Association, c/o Vincent Thomas, 35 Hemlock Road, Branford, CT, 06405.

Walter Henry Grisevich, 94, of East Hartford, CT passed on to his reward on February 19th, 2020. Born on November 17, 1925, he was one of six children of Harry Benedict and Katherine (Pavilowich) Grisevich of Hartford. As a 17 year old farm... View Obituary & Service Information

The family of Walter Henry Grisevich created this Life Tributes page to make it easy to share your memories.

Walter Henry Grisevich, 94, of East Hartford, CT passed on to...

Send flowers to the Grisevich family.