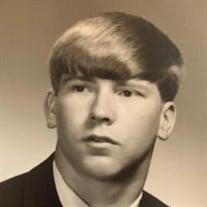 Walter Robert Miller, 69, formerly of East Hartford and Hartford, CT, passed away peacefully after a brief illness on Monday, April 6th, 2020 at Kimberly Hall North, Windsor, CT. Born in Hartford on October 23rd, 1950, son of the late Walter E. and Lillian J. (Walters) Miller. He was predeceased by his paternal grandparents Edmond and Margaretta Partell, and his maternal grandparents Gomer and Gladys P. Walters, many aunts and uncles and a very special family friend Angie Tancredi. Walter is survived by his daughter, Dawn Larson and husband Adam, his precious granddaughter Brielle Larson Colorado, Springs, CO, son Gordon Miller, Newington, CT, his sister Joyce-Lynn Napierata and husband Douglas, Webster, MA, his brother James Miller, Hartford, CT, and his nephews, Dennis Sedgwick and Dean Sedgwick, Manchester, CT. Also his aunt Jean, uncle Bill Ciotto, aunt Pauline, uncle Gerry Kavanagh and many cousins. Walter resided in East Hartford for much of his life where he graduated from George J. Penney High School, Class of 1969. Went on to Porter School of Design and received his Architectural Design Certificate in June 1971. Worked for the Connecticut Department of Transportation, retiring in June 1996. Walter was a 45 year mason, a member of Hartford Evergreen 88 Masonic Lodge. He later joined Hiram Lodge #1 in New Haven.He also was a Knights Templar, member of Saint Elmo No. 9 in Meriden, CT. A member of Sphinx Shriners of Newington, CT. Known as Scorpo the Clown, Walter was a great gift to those who got to know him, he loved being a clown. Through his special talent, he shared his selfless love with so many people, and sought to invest himself in the lives of others, bringing so many people joy and lifting their spirits. Walter once wrote and I quote, "My special interest since 1990, has been professional clowning with the Shriners Organization. My biggest joys in life are to make people laugh; through parades, Shrine Circus, visiting both Shriners Hospitals, The Cripples Hospital in Springfield MA. and The Boston Burn Institute. My registered clown name "Scorpo" is in the Hall of Fame." His other passion was his love of music and movies which he passed on to his children. He loved spending time with his son Gordie on the golf course and attending The Travellers PGA Tournaments together. At this time Walter's family would like to express their gratitude to the caring staff of Kimberly Hall North for their warm and professional care over the past few years. Burial will be private at the convenience of the family. A celebration of his life will be scheduled at a later date and time at Rose Hill Funeral Home in Rocky Hill, CT.

The family of Walter R. Miller created this Life Tributes page to make it easy to share your memories.

Send flowers to the Miller family.