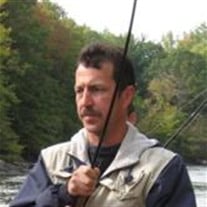 Wayne Thomas Brookbanks, 52, of Newington, passed away peacefully at his cabin in Vermont on April 11, 2017. He was married to his loving wife of 18 years, Tammy Brookbanks. He was the son of George Brookbanks and Jeannette (Cardalico) Conderino. Wayne is survived by his two children, Brittney Leigh Brookbanks and Wayne Thomas Brookbanks II, and his future son-in-law Joseph Shine. Wayne is also survived by his step-father, Phil Conderino; two sisters, Donna (Mike) Downes, Jeanie (Kevin) Smith; one brother, Paul Brookbanks; three step-sisters, Kim (Jesse) Branche, Lori Conderino, and Lisa (Bruce) Chapman; one brother-in-law, Randy Bergeron; eight nieces, Courtney, Paula, Grace, Sarah, Skyler, Sierra, Sophia and his great niece, Jeannette; several cousins, aunts, and an uncle; and his first wife Dawn Conlon. After high school Wayne joined the Navy and was stationed in California as a SeaBee at the San Diego Naval Base. He was employed at Delmar as the lead press operator. Wayne was happiest outdoors and so loved his cabin in Vermont and spending time with his wife and family, He was a persistent fisherman at Peppertree Campground, where he made beloved friends. Some of his favorite places to be found were hanging by the bonfire and tending his garden. His most faithful companion was his service dog Ariella Jeannette who was always by his side. He is predeceased by his Mother and Father, Uncle Ronny, Uncle Ricky and Aunt Gail. We will forever miss your life tips; we had the coolest dad ever. As a loving father and husband we will always remember you squeezing our hands three times…I Love You. There will be calling hours on Wednesday April 19th from 9:15 to 10:15 AM at Rose Hill Funeral Home 580 Elm St. Rocky Hill, followed by a Mass of Christian Burial at 11 AM at Corpus Christi Church, Wethersfield, burial will follow at the Rose Hill Memorial Park, Rocky Hill. In lieu of flowers donations can be made to a local dog rescue of your choice.

Wayne Thomas Brookbanks, 52, of Newington, passed away peacefully at his cabin in Vermont on April 11, 2017. He was married to his loving wife of 18 years, Tammy Brookbanks. He was the son of George Brookbanks and Jeannette (Cardalico) Conderino.... View Obituary & Service Information

The family of Wayne Thomas Brookbanks created this Life Tributes page to make it easy to share your memories.

Send flowers to the Brookbanks family.