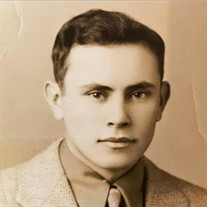 William “Bill” J. Henaghan II, 90, passed away peacefully on May 11, 2020. He was born on August 28, 1929, in Hartford, CT, and grew up in the South End of Hartford on Victoria Road. He was the son of Claire (Downs) and William J. Henaghan I, a police captain for the city of Hartford known as Captain Raggs. As a young child, Bill attended Dr. James H. Nayler school, and also served as a messenger for the civil defense during World War II. Bill fell in love with fellow student Virginia Mary Cocolla before graduating from Bulkeley High School in Hartford in 1948, where he had twenty-five close friends who called themselves the “South End Tigers.” They spent their time playing baseball and football, and hanging out in the neighborhood. He was also on his high school track team. He attended the University of Connecticut, earning a bachelor’s in psychology in 1952, and later earning a master’s in psychiatric social work in 1956, also from UConn. He would be a proud UConn alum for the rest of his life, whether watching games on TV, attending many women’s and men’s basketball and football games, singing his children to sleep with the Husky Fight Song or watching two of his children graduate from the school. He went on to have a successful career counseling groups, families and individuals for more than 50 years, predominately at Grove Hill Medical Center in New Britain, CT, making a personal difference in the lives of many families. Bill and Virginia were married on March 28, 1953. The original wedding date of April 4th had to be moved up after Bill, looking to fulfill his duty to his country, enlisted in the US Army without his fiance’s knowledge. He was deployed to Korea as a medic during the Korean War before being stationed in Honolulu, Hawaii, where the newlyweds spent their first years of marriage. Bill and Virginia had a lovely and joyful life together for more than 60 years. They raised eight children, and spent about 40 years in Hebron, CT, on Hope Valley Farm…32 acres in the country, which was a dream come true for two kids from the city. Over the years, he enjoyed mowing the grass with his tractor, operating a dog kennel, showing and raising Siberian huskies, racing horses and making trips to Saratoga, cutting firewood with his children up in the woods, going to the casinos, planting a Christmas tree farm and traveling the world with Virginia, including to the Bahamas, Hawaii, cruises, Italy and a special trip to Ireland for his 80th birthday with several of his children. He was very proud of his family, and his Irish heritage, loving the Clancy Brothers and anything Irish, and was a coin and stamp enthusiast. Bill was also very involved in his children’s activities when they were younger, serving as Chairman of the Board of Education in Hebron and as president of the RAM football association. He was known for walking with a pep in his step, spare change and tic tacs always jingling in his pockets while humming a happy tune. A cowboy hat and overalls or jeans with red suspenders was his favorite outfit outside of work. For the last several years, Bill was a resident of Old Saybrook, CT, before moving to the Veterans Affairs Center in Rocky Hill, CT, this past fall where he was surrounded by a caring team and numerous veterans to share war stories with during his final months. He is predeceased by the love of his life, Virginia; his eldest son, William J. Henaghan, III; and his sister, Marion Harrison. He leaves behind a loving family comprised of children, spouses and partners Kathleen Wolf and Marty Melgey, Maureen Henaghan, Linda Henaghan, John Henaghan and Dean Hummel, Kerry and Pam Henaghan, Kelly and George Tsamis, Shannon and Brian Lapierre, and Jennifer and Gerry Pagano; as well as grandchildren and their spouses and partners, including William Faulkner and Matilda Santana; William and Amy Henaghan, Traci Artist, Kendyl Henaghan, Michael and Aidan Artist, Michael Hummel, Cody Artist, Casey Tsamis, Devin Henaghan, Danielle Lapierre and Samantha Pagano. In addition, Bill was blessed with two great grandchildren, Alyssa and Rowan. In an interview for his granddaughter Traci’s school project several years ago, he passed along these sage words for living the best life you can. “Be patient, considerate and loving. The world has never been a bad place, it needs happy and sad things to be appreciated.” Never is this more true than today. With COVID-19 restrictions still in place, the family will host a private burial.

The family of William "Bill" J. Henaghan II created this Life Tributes page to make it easy to share your memories.

Send flowers to the Henaghan family.