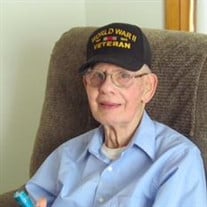 William C. Jensen, 93, of Wolcott died peacefully Friday, March 4, 2016 in the presence of his loving family. He was the beloved husband of 59 years of the late Ethel (Hansen) Jensen. Bill was born in New Britain March 2, 1923, son of the late William C. and Virginia (Gootee) Jensen. After serving in the Army Air Corps during WW II, Bill married his sweetheart Ethel and they started their family, eventually settling in Wolcott in 1959. Bill worked as District Service Manager for Friden / TRW for many years until his retirement in 1988. Bill was well known for being a true gentleman with a very loyal, kind, and generous heart. A loving perfectionist in every aspect of his life he unselfishly gave his time, talent, and expertise in carpentry, remodeling, and handyman skills to his family and friends. As a Wolcott Congregational Church Men’s Club member, he contributed those talents to his church family as well. Bill’s true passion was spending time with his family who will forever cherish honoring his 93rd birthday with a celebration just a few days prior to his passing. Bill is survived by his children William C. and Eileen Jensen of Waterbury, Linda Minervini of Wolcott (with whom he made his home) and her former husband Joseph Minervini, and David and Cheryl Jensen of Waterbury. He is also survived by his beloved grandchildren William C. and Patricia Jensen, Dane and Deborah Jensen, Heather Minervini, Alissa and Kerey Brown, David Jensen, Sarah and Marc Boucher, and Emily Jensen and her fiancé Cooper Brown. In addition Bill leaves behind his cherished great-grandchildren Emma, Noah, Sophie, William C., Aidan, Kailey, Tyler, and Anna. He also leaves his brother and sister in law, Donald and Mary Jensen of Shelton, his sister in law, Carol Hansen of Rocky Hill, and several nieces and nephews. Bill was predeceased by his brother, Robert Jensen and his sister, R.Lorraine Sonstrom. The family would like to extend their sincere appreciation to the staffs of Wolcott View Manor, Hartford Healthcare at Home VNA, and Wolcott Volunteer Ambulance for the loving care provided to Bill and his family during the past few months. A memorial service will be held Tuesday, March 15, 2016 at 10 am at Wolcott Congregational Church, 185 Center St, Wolcott followed by burial with military honors at 2 pm at Rose Hill Memorial Park, 580 Elm St, Rocky Hill. Calling hours will be held Monday, March 14, 2016 from 6-8 pm at Rose Hill Funeral Home, 580 Elm St, Rocky Hill. In lieu of flowers memorial contributions may be made to Wolcott Congregational Church, 185 Center St, Wolcott, CT 06716 or Wolcott Volunteer Ambulance, 48 Todd Rd, Wolcott, CT 06716. Additional information may be found at www.rosehillfuneralhomes.com

William C. Jensen, 93, of Wolcott died peacefully Friday, March 4, 2016 in the presence of his loving family. He was the beloved husband of 59 years of the late Ethel (Hansen) Jensen. Bill was born in New Britain March 2, 1923, son of the late... View Obituary & Service Information

The family of William Cletus Jensen created this Life Tributes page to make it easy to share your memories.

Send flowers to the Jensen family.