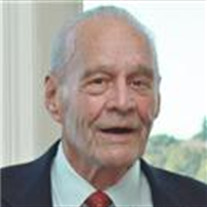 William F. Sandbach, 92, of Wethersfield, CT passed away Wednesday, October 21, 2015, at Middlewoods of Newington, after a long and full life. Born in New Jersey on December 1, 1922, he was the son of the late Wilmer Sandbach and Helen Sandbach (Lewis). After graduating from the University of Connecticut, Bill joined the Navy and proudly served his country during WWII. Over the years, he was employed at Royal Typewriter, Underwood Typewriter and Connecticut Spring in Farmington, CT. He was best described by family and friends as loving, generous and selfless with an amazing sense of humor. Bill always had a smile on his face and a twinkle in his eye. He was pre-deceased by the love of his life of 62 years, his "beautiful bride", Barbara Sandbach (D'Arche). He is survived by his three children, Richard Sandbach and his wife Valerie of Southington, CT, his daughter Deborah Houseman (Sandbach) of Wethersfield, CT, his daughter Patricia Reed (Sandbach, Suchman) and her husband Edgar of West Hartford, CT; his brother Dave Sandbach of Valdosta, GA and his sister Beverly Heminway (Sandbach) of Middlebury, CT. "Papa" is also survived by his grandchildren, Ashley Spring (Houseman) and her husband Daniel, Lauren Suchman, Alaina Sandbach, Justin Houseman, Rachel Sandbach, Morgan Reed, Alexandra Reed, his great-granddaughter, Olivia Spring and many nieces and nephews. He was a beloved husband, father, brother, grandfather, uncle and friend who will be missed dearly. Bill's greatest joy was spending time with his family and the memories made with him will forever live on in our hearts. The family would like to extend their thanks to the many wonderful caretakers at Middlewoods of Newington, Visiting Angels and VITAS Hospice Care. A celebration of his life will be held at 11 am Saturday, October 24, 2015 at St. Paul's Evangelical Lutheran Church, 371 Wolcott Hill Road, Wethersfield. There are no calling hours and burial will be private. In lieu of flowers, memorial donations can be made to the American Red Cross.

William F. Sandbach, 92, of Wethersfield, CT passed away Wednesday, October 21, 2015, at Middlewoods of Newington, after a long and full life. Born in New Jersey on December 1, 1922, he was the son of the late Wilmer Sandbach and Helen Sandbach... View Obituary & Service Information

The family of William Franklin Sandbach created this Life Tributes page to make it easy to share your memories.

Send flowers to the Sandbach family.