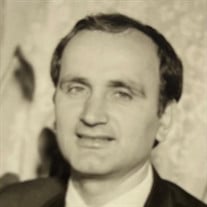 Xhemal James Brahimi, beloved husband and father, aged 71 passed away peacefully on November 1st surrounded by his wife, three sons and his youngest brother at Hartford Hospital. He was born in Kulumbri, Albania to Uke Brahimi and Shkurte Brahimi. He was the fifth of eight children, seven boys and one girl. He went to elementary school near his birthplace and was an exemplary student. With support of his oldest brother, he went to middle school and high school at Shkolla Migjeni in Puke. In 1969 he went to University in Tirana, Albania and completed graduate school specializing in dentistry. In college he met his future wife of 40 years, Engjellushe Brahimi and they had three boys Jimi, Indrit and Erind. He had a fulfilling career in medicine. His first professional work was as a math teacher for one year, followed by a 23 year career as a dentist in Albania. In 1997, at the age of 47, Xhemal emigrated with Engjellushe and his three children to the United States, leaving his dentistry career and loved ones in order to create a better future for their children. After living in Hartford for three years, they purchased their first house in Newington, CT where he and his wife raised their family and created many happy memories. In CT, he worked as a laborer often with two jobs at a time for the first few years and went to night school to get certifications for medical assistant, phlebotomist, and eye technician. He worked for 5 years as an eye technician in an Ophthalmology office in Enfield, CT and subsequently worked as a Phlebotomist for 15 years in Hartford, CT and Newington, CT until his retirement in 2018. He was well respected by all his patients and treated everyone with a kind smile. After retirement, he was able to pursue his hobbies and travel with his wife. During the last few years of his life he courageously faced a battle with cancer. Nonetheless, he did not let that get in the way of pursuing life to the fullest. He enjoyed sports and history, and above all he loved spending time with his wife, sons and his eight grandchildren for whom he leaves many happy memories. He is survived by his wife, Engjellushe Brahimi, his three sons: Jimi Brahimi of Berlin, CT, wife Jonilda and two children, Indrit Brahimi of Wethersfield, CT, wife Alda and four children, and Erind Brahimi of New York, NY, wife Mallory and two children. He is also survived by his six brothers and sister, and many nephews, nieces, and cousins who all loved him dearly. He is pre deceased by his father and mother. Everyone who knew him had the utmost respect for Xhemal, someone who was a true gentlemen that made everyone proud to have had the chance to be part of his life. May you rest in peace and know that you will forever be in all of our hearts.

Xhemal James Brahimi, beloved husband and father, aged 71 passed away peacefully on November 1st surrounded by his wife, three sons and his youngest brother at Hartford Hospital. He was born in Kulumbri, Albania to Uke Brahimi and Shkurte Brahimi.... View Obituary & Service Information

The family of Xhemal James Brahimi created this Life Tributes page to make it easy to share your memories.

Send flowers to the Brahimi family.